Oakland Museum of California presents
MARION GRAY: Within The Light

(Oakland, CA)—The Oakland Museum of California (OMCA) presents an exhibition of work spanning four decades by groundbreaking and chimerical California artist/photographer Marion Gray in Marion Gray: Within the Light, on view February 14 through June 21, 2015 in the Gallery of California Art. Curated by Christina Linden, Associate Curator of Painting & Sculpture, the exhibition highlights the career of this artist, innovator, and performance art-world insider who has blurred and expanded the boundaries between fine art photography, performance, and documentation.

Marion Gray: Within the Light features 23 photos by the artist, who has spent four decades capturing performances, dance, and installations by some of the most significant artists in the Bay Area and beyond. The creative networks portrayed in the exhibition have fueled Gray’s life work as a photographer and, in turn, Gray’s images have contributed to the vitality of the scene. Including never-before-seen photographs, the exhibition covers the 1970s to the present and highlights the work of artists including Barbara Hammer, The Harrisons, Sara Shelton Mann, Eiko + Koma, Joan Jonas, Guillermo Gómez-Peña, Ann Hamilton, Marina Abramović, and more. The exhibition is the fourth exhibition in an ongoing series exploring contemporary topics in California through photography.

“An intense and longstanding dedication to subversive and innovative arts in the Bay Area is evident in Marion’s work,” asserts curator Christina Linden, “over years of prolific practice, she has carefully honed a sensibility about what’s most compelling and how this fits into a broader history of live art in our region.”

Artist/Photographer Marion Gray’s collective work presents a unique and multifaceted vision: a very personal portrait of the remarkable individuals and events that have defined the Bay Area art world. She has been active in the vital Bay Area art scene since the 1970’s. In 1975 she completed her studies at the University of California at Berkeley in the Art History Department with Peter Selz, and in the Art Practice Department with Joan Brown, Jim Melchert, and Peter Voulkos.

Her work has taken her from the West Coast to New York and Europe, and covers a wide spectrum of artists. Her life’s work has created an expansive archive, always questioning and extending the possibilities of visual documentation as an art form. Gray currently resides and works in San Francisco. Gray had just completed her two degrees at UC Berkeley in 1975 when the artists Christo and Jeanne-Claude came to the university to lecture on their upcoming project for Marin and Sonoma counties, Running Fence. In the fall of 1976 she hired on to work with the Christos. The project proved to be the beginning of a career for Gray working with artists of all practices creating imagery using both still and moving cameras. Gray has created a unique, 40-year archive of work. Works include photographing one-time conceptual performances with John Cage or Tom Marioni (her documentation is the only record of these pieces); working with women’s groups like the Guerrilla Girls or Motion; dance ensembles including Nancy Karp + Dancers and Della Davidson; musicians Paul Dresher, Meredith Monk (with sculptor Ann Hamilton); composer Alvin Curran; theater groups such as George Coates Performance Works; and other projects in both the United States and Europe.She has published in numerous magazines and books including Art in America, Art Forum, Leonardo Music Journal, High Performance, Art in the San Francisco Bay Area 1945 to 1980, and Woman in Technology 2003, and has exhibited in group and solo shows. Selected exhibitions include the San Francisco Art Institute Marion Gray/Photographs of Actual Art, the Performing Arts Library and Museum, In Performance–Tapestry and SF/SF (San Francisco/Science Fiction) an exhibit at the SF Arts Commission and the Clock Tower in NYC. In 2005, she showed in the Czech Republic, at the Palffyho Palace, Jazzova Sekce Gallery. The exhibition Resounding Works used photography, video, and sound. 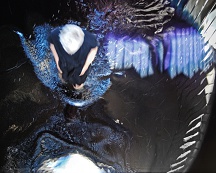